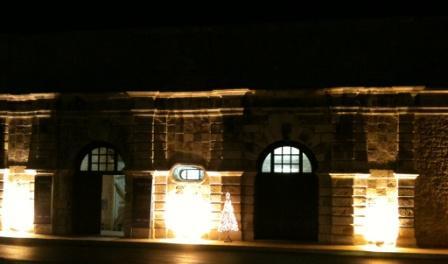 The fortifications of Heraklionare a series of defensive walls and other fortifications which surround the city of Heraklion (formerly Candia) in Crete, Greece. The first city walls were built in the Middle Ages, but they were completely rebuilt by the Republic of Venice. The fortifications managed to withstand the second longest siege in history for 21 years, before the city fell to the Ottomans in 1669

Heraklion's fortifications have made it one of the best fortified cities in the Mediterranean. The walls remain largely intact to this day, and they are considered to be among the best preserved Venetian fortifications in Europe.

The first fortifications in what is now Heraklion were built by the Byzantine Empire. The city was captured by Arabs in 824, and it became the capital of the Emirate of Crete. At this point, they built a wall of unbaked bricks around the city, and surrounded it by a ditch. The new capital became known as Rabdh al-Khandaq (Trench Castle). Click for complete WIKI...