KOULE FORTRESS OR ROCCA A MARE 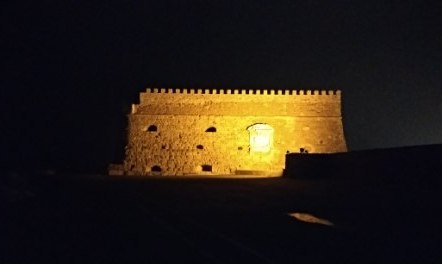 The Koules (Greek: Κούλες) or ROCCA A MARE ("Fort on the Sea" in Italian) is a fortress located at the entrance of the old port of Heraklion, Crete, Greece. It was built by the Republic of Venice in the early 16th century, and is still in good condition today.

The site was possibly first fortified by the Arabs in the 9th or 10th centuries. By the second Byzantine period, a tower known as Castellum Comunis stood on the site. In 1303, the tower was destroyed in an earthquake but was repaired.

In 1462, the Venetian Senate approved a programme to improve the fortifications of Candia. Eventually, the Byzantine tower was demolished in 1523, and the Castello a Mare began to be built instead. Old ships were filled with stone, and were sunk to form a breakwater and increase the area of the platform on which the fortress was built. The fortress was completed in 1540. In 1630, the fort was armed with 18 cannons on the ground floor, and 25 cannons on the pathway leading to the roof. Click for complete WIKI...